Transparent encryption is relatively easy to implement, but without understanding what it actually means or why you are implementing it, you will probably make the assumption that this will prevent the data from being accessed by unauthorized users. Nothing can be further from the truth.

Listing the threats to protect against

Let's first list the threats you want to protect against. It is beneficial that these threats are also scored in the organization for their likelihood of occurrence and effect, so that you can optimize and prioritize the measures appropriately.

To visualize the threats, consider the situation of an application that has a database as its backend. The application is hosted on a different system than the database. In the diagram, the blue color indicates an application-specific focus. This does not mean it isn't infrastructure oriented anymore, but more that it can't be transparently implemented without the application supporting it. 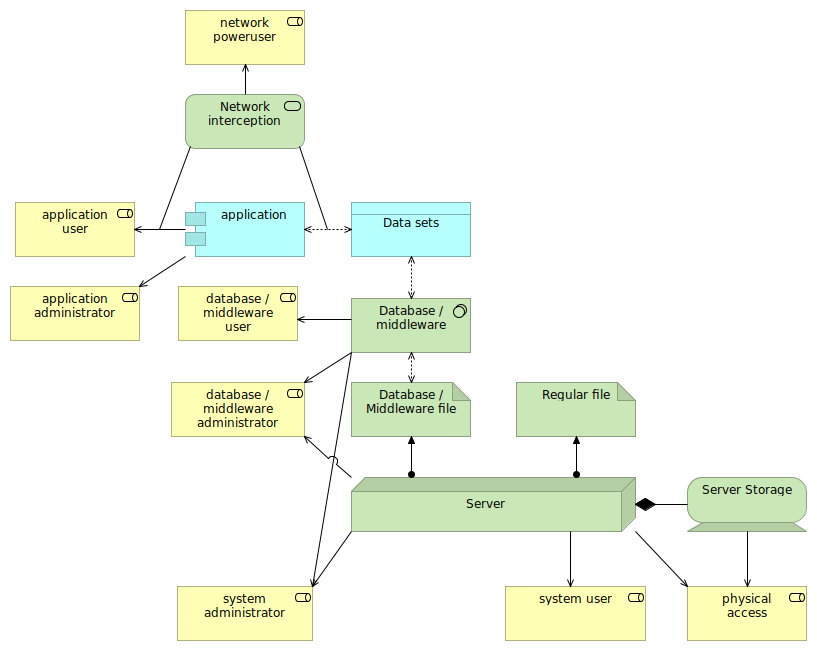 There are eight roles listed (well, technically seven roles but let's keep it simple and make "physical access" also a role), ranging from the application user to the physical access:

Further, while the example is easiest to understand with a database system, be aware that there exist many other middleware services that manage data (like queueing systems) and the same threats and measurements apply to them as well.

Transparent encryption, such as through LUKS (with DM-Crypt) on Linux, will encrypt the data on the disks, while still presenting the data unencrypted to the users. All users. Its purpose hence is not to prevent unauthorized users from accessing the data directly, but to prevent the storage media to expose the data if the media is leaked or lost. 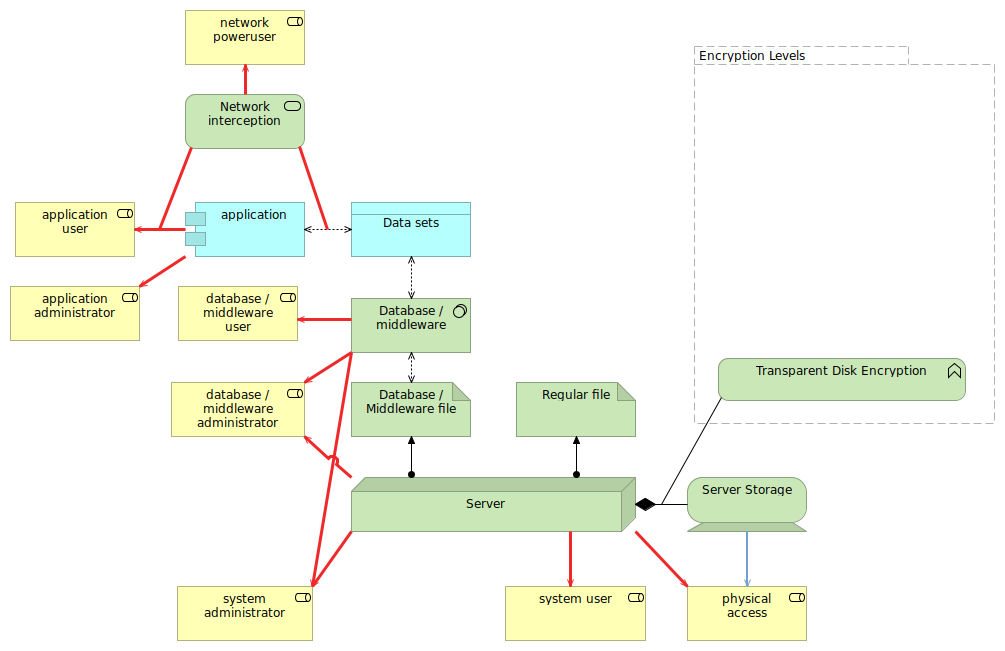 Transparent disk encryption is very sensible when dealing with removable media (like USB sticks), especially if they contain any (possible) confidential data and the method for transparent encryption is supported on all systems where you are going to use the removable media. In larger enterprises, it also makes sense to apply as well when multiple teams or even companies have physical access and could attempt to maliciously access the systems.

For server disks or SAN storage for instance, this has to be balanced against the downsides of the encryption. You can do disk encryption from the storage array for instance, but this might impact the array's capability for deduplication and compression. If your data centers are highly secured, and you do not allow the storage media to leave the premises without being properly wiped or destroyed, then such transparent encryption imo has little value.

Of course, when you have systems hosted in third party locations, then you do have a higher risk that the media are being removed or stolen, especially if those locations are accessed by many others, and your own space isn't physically further protected. So while a company-controlled data center with tight access requirements, policies and controls that no media leaves the premises and what not could easily evaluate to not apply transparent disk encryption, using a public cloud service or a non-private colocation facility should assess encryption capabilities on disk (and higher).

Furthermore, a properly configured database system will not expose its data to unauthorized users to start with, so the system user role should not have access to the data. But once you have local access to a system, there is always the threat that a privilege escalation bug is triggered that allows the (previously lower privileged) user to access protected files.

Some database technologies (or more general middleware) offer transparent encryption themselves. In this case, the actual database files on the system are encrypted by the database engine, but the database users still see the data as it is unencrypted. 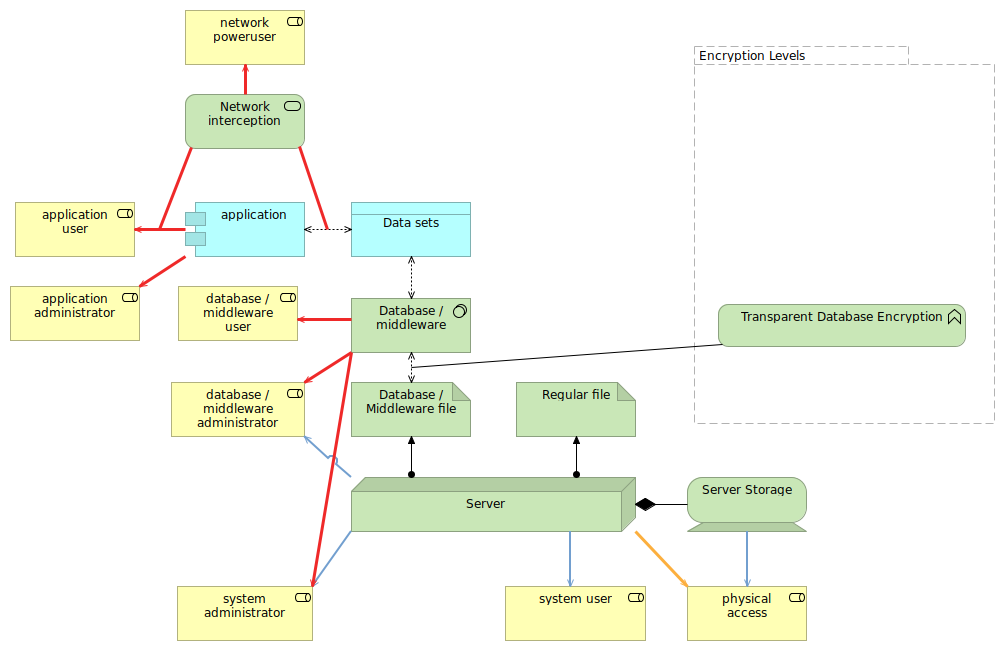 Here again, it is important to know what you are protecting yourself from. Transparent database/middleware encryption does prevent the non-middleware administrators from directly viewing the data through the files. However, system administrators generally have the means to become the database (or middleware) administrator, so while the threat is not direct, it is still indirectly there.

The threat of privilege escalation on the system level is partially mitigated. While a full system compromise will lead to the system user getting system administrator privileges, partial compromise (such as receiving access to the data files, but not to the encryption key itself, or not being able to impersonate users but just access data) will be mitigated by the transparent database encryption.

Important to see here is that the threats related to the physical access are also mostly mitigated by the transparent database encryption, with the exception that database-only encryption might result in the encryption key being leaked if it is situated on the system storage.

Most of the threats however are still not mitigated: network interception (if it doesn't use a properly configured TLS channel), admin access, database user access, application admin and application users (through application vulnerability) can still get access to all that data. The only focus these measures have is data loss through physical access.

Some database technologies support out-of-the-box data encryption through the appropriate stored procedures or similar. In this case, the application itself is designed to use these encryption methods from the database (or middleware), and often holds the main encryption key itself (rather than in the database). 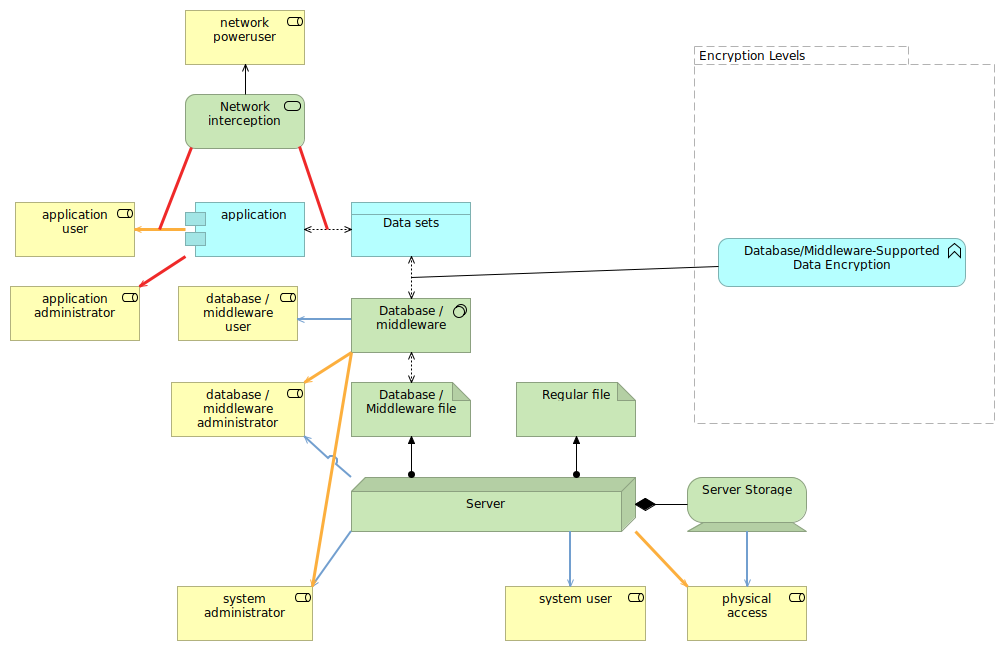 While this prevents some of the attack vectors (for instance, some attacks against the application will not result in getting a context that is able to decrypt the data) and mitigates the attack vectors related to direct database user access, there are still plenty of issues here.

System administrators and database administrators are still able to control the encryption/decryption process. Sure, it becomes harder and requires more thought and expertise (like modifying the stored procedures to also store the key or the data in a different table for them to access), but it remains possible.

Because of the attack complexity, this measure is one that starts to meet certain expectations. And because the database or middleware is still responsible for the encryption/decryption part, it can still use its knowledge of the data for things like performance tuning.

With application-managed data encryption, the application itself will encrypt and decrypt the data even before it is sent over to the database or middleware.

Personally, I think that application-managed data encryption is always preferred over the database- or middleware supported encryption methods. Not only does it remove many threats, it is also much more portable, as you do not need a database or middleware that supports it (and thus have to include logic for that in the application).

Of course, applications will need to ensure that they can still use the functionalities of the database and middleware appropriately. If you store names in the database in an encrypted fashion, it is no longer possible to do a select on its content appropriately.

The highest level of protection against the threats listed, but of course also the most impactful and challenging to implement, is to use client-managed data encryption. 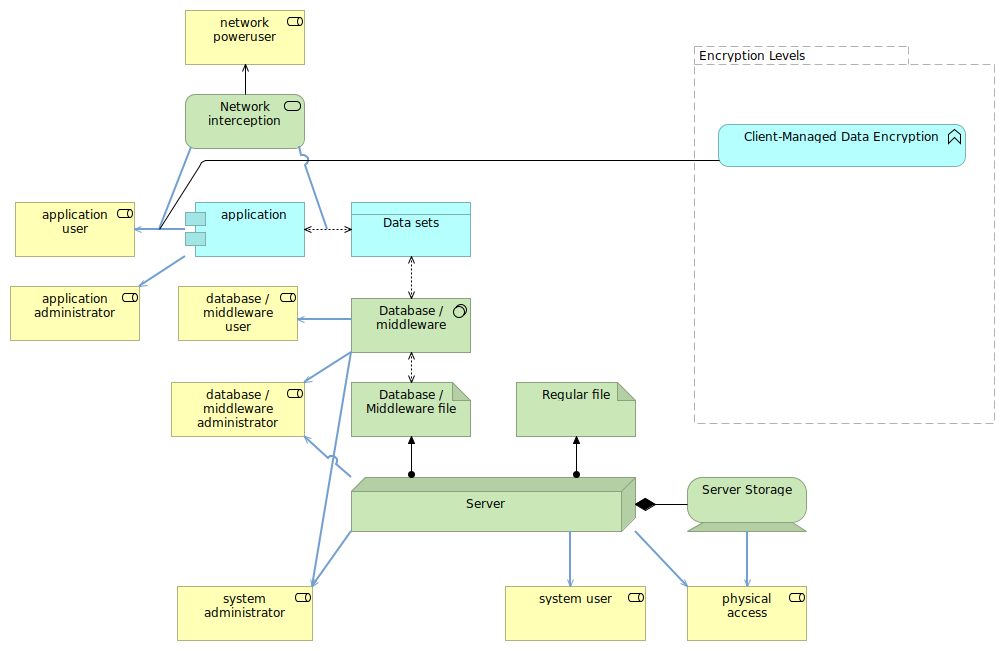 A web application might for instance have a (properly designed) encryption method brought to the browser (e.g. using javascript), allowing the end user to have sensitive data be encrypted even before it is transmitted over the network.

In that case, none of the attack vectors will be able to obtain the data. Of course, there are plenty of other attack vectors (protecting web applications is an art by itself), but for those we covered, client-managed encryption does tick many of the boxes.

However, client-managed data encryption is also very complex to do securely while still being able to fully support the users. Most applications that employ this focus already on sensitive material (like password managers) and use end user provided information to generate the encryption keys. You need to be able to deal with stale versions (old javascript libraries), multitude of browsers (if it is browser-based), vulnerabilities within browsers themselves and the web application, etc.

Network encryption (as in the use of TLS encrypted communications) only focuses on the confidentiality and integrity of the communication, in our example towards the network poweruser that might be using network interception. 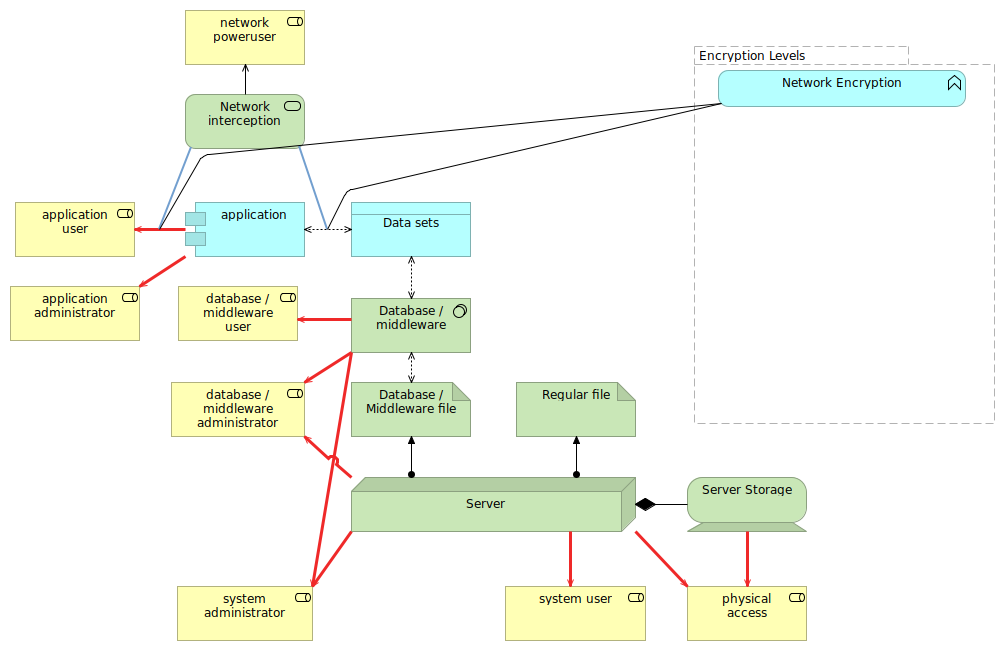 I hope that this article provides better insights in when transparent encryption is sensible, and when not. With the above assessment, it should be obvious that transparent (and thus without any application support) encryption methods do not cover all the threats out there, and it is likely that your company already has other means to cover the threats that it does handle. 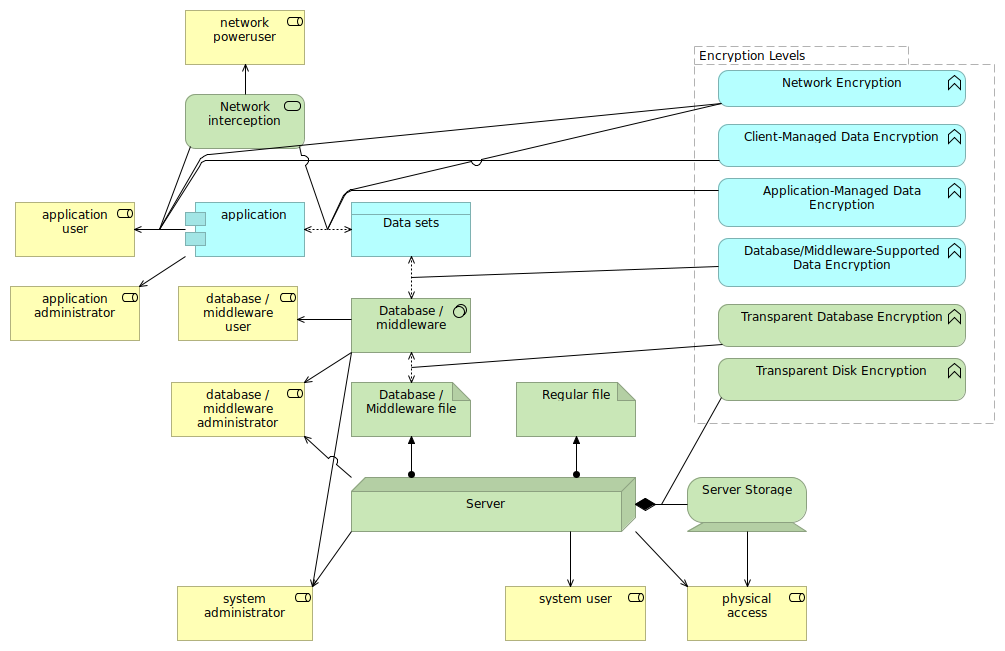 The above image shows all the different encryption levels and where in the application, database and system interactions they are situated.