These vulnerabilities are a good example of how scale is a cloud threat. Companies that do not have enough experience with public cloud might not assume this in their threat models.

Before tackling the scale of a cloud service, let's consider an on premise service. Services that run on premise for a company are often built up specifically for that company, and have no relationship with other customers of the same service. Taking the NoSQL example, companies can perfectly run NoSQL database services on premise that have no internet presence. Moreover, these services are also often not directly exposed to the internet.

Running services within your own premises reduces the likelihood that attackers exploit vulnerabilities of that service. Attackers that are not particularly eyeballing your company might not know you have that service on premise. Even if they do know, having proper protections in place should prevent direct access to those services. 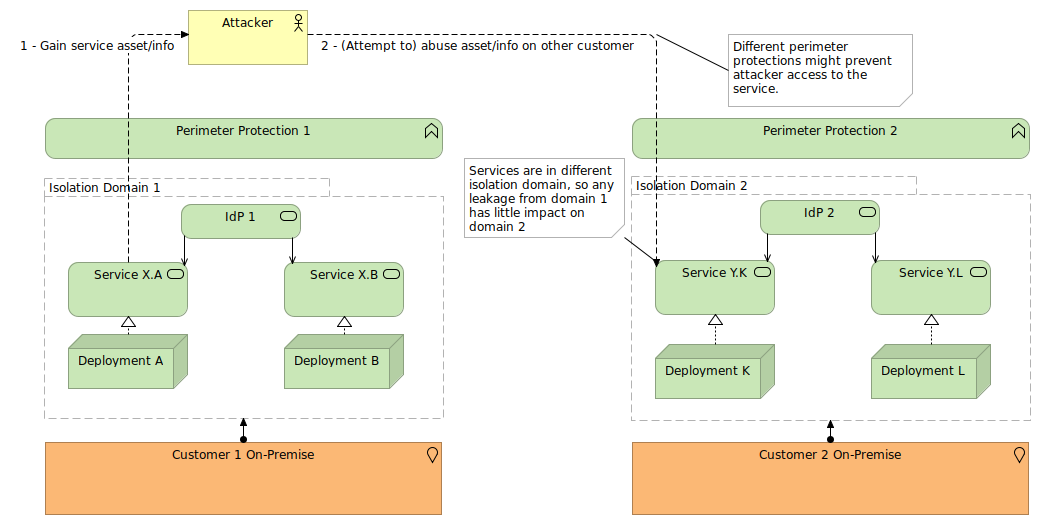 Some situations do require services to expose themselves to the internet. This exposure increases the attack surface for the service significantly. However, these services are still part of a rather isolated deployment that I call an isolation domain: a logical aggregation of services that share one or more integrations and interactions, broadening the scope of potential vulnerabilities and misconfigurations.

Separate isolation domains imply that vulnerabilities or misconfigurations that rely on information from the domain cannot spread. This is not the same as separate deployments or environments, as those often do share certain integrations. For instance, all NoSQL databases within a company might use that company's identity provider for federated authentication. But NoSQL databases exposed to the internet from two completely different companies are often in separate isolation domains.

The Cosmos DB vulnerability exploited the fact that all Cosmos DB deployments are part of the same isolation domain.

Public cloud platform services, like Cosmos DB, are often lacking these two attributes: they have different perimeter protections in place, and share the same isolation domain.

I do not want to imply that public cloud providers do not provide perimeter protections against their services. They most definitely do, but the scope of the perimeter is different from what a company would apply. Whereas a company gains some measurable security by hiding services or ensuring those services are not reachable from unauthorized contexts, public cloud platform services need to be easily accessible for the public cloud to become successful. Security paradigms like Zero Trust are needed to raise the security posture of these services. Companies that are building solutions within the public cloud will find that this requires a different mindset, and that these environments are not comparable with the traditional on-premise designs.

For the Cosmos DB vulnerability, the FAQ mentions that instances that are not internet facing are still somewhat impacted (as the credentials could have been leaked) but accessing the database (by using the credentials) will not be possible without additional vulnerabilities or misconfigurations being addressed. This is comparable to an administrator password leakage for your properly isolated on-premise database: while your database might not be immediately accessible by attackers, you're still going to change the password as soon as possible to prevent it from being used in later attacks. 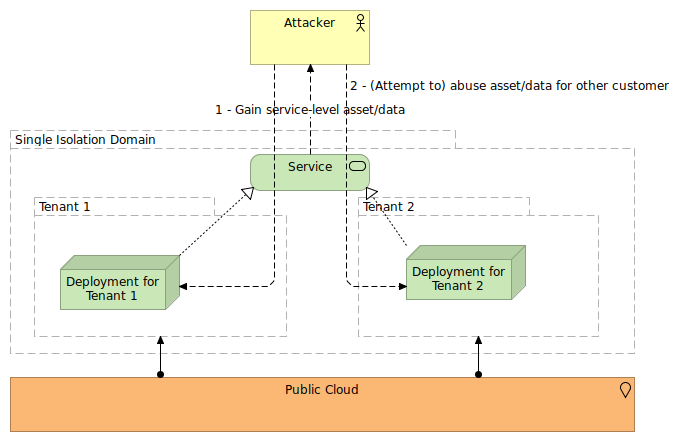 The isolation domain is a bigger hurdle to take though, as this is almost always by design. Platform services always share interactions or integrations across all the customers of the public cloud. Even though you have your own logical deployment (or even ask for your own physical deployment), the main interface to access your service is shared. The service you use to authenticate users or systems is shared (even when it will eventually use federated authentication to your own identity provider, the initial service is still the same).

This shared isolation domain makes each public cloud service a fantastic target for attackers (and luckily also security researchers). Exploits might not just reveal data or insights from one customer, but from thousands of customers all over the world. And the bigger the cloud provider, the bigger the impact.

This problem of using a shared isolation domain is not restricted to public cloud platform services only. Even on premise deployments that use a public control plane are taking part in the same isolation domain as all other customers of the same service.

While such setups have benefits (such as using the same control plane for multiple deployments across different environments and even hosting setups, and not having to manage and maintain the control services yourself) they do increase the risk exposure in a not dissimilar fashion from the pure public cloud services.

How to tackle these concerns

Knowing about these increased risks (reachability/exposure, and the shared isolation domain) is the foremost important part that this article wants to address. Once these risks are considered, companies can start taking precautions. I've mentioned the zero trust model as a way to address the reachability/exposure risk. To address the shared isolation domain, reducing the impact of a successful exploit can be done through proper architecture and design that uses the "it is not if, but when" principle for cyberattacks.

For instance, the data within the databases can use application-level encryption (meaning the encryption is not done by or through the database, but by the front-end application that interacts with the database) to reduce the impact of data leakage through such vulnerabilities. Proper data governance processes should also be in place to remove any data that is no longer needed on that database. Active security validations on log data should exist to detect deviating access patterns, and access controls should be in place to prevent unauthorized access even from succesfully authenticated users or systems.

In the Cosmos DB case, the vulnerability was possible through a selectable feature: deployments that do not have the Jupyter Notebook feature active would not leak the credentials. Hence, proper configuration management of services and disabling features that are not going to be used is paramount for cloud services.

If architects are sufficiently aware of the added risks of public cloud services, they can properly balance these risks against the benefits of the public cloud, and make appropriate adjustments to the architecture and design of the solutions. The main challenge here is to make sure this awareness is raised, and that this awareness is not only reaching the architects, but also the engineers and other stakeholders. If not, architects risk that they will be seen as "innovation inhibitors" if they would recommend changes and improvements to tackle these risks.