Like with the component view, the location view is a layered approach. While I initially wanted to call it the network view, "location" might be a broader term that matches the content better. Still, it's not a perfect name, but the name is less important than the content, not? 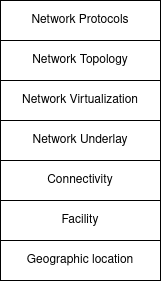 Let's go through the layers from bottom to top.

The geographic location is the least IT-specific view out there, as it represents where everything is in the world. These views are popular not only to scope projects better (like data center locations) but also to support getting important infrastructural metrics.

WAN latency, for instance, is limited by the distance (you can't outsmart physics), and by knowing the path between two points, you can calculate the throughput and latency (such as through the Wintelguy WAN Latency Estimator). When designing redundant network connections between separate locations, you might depend on multiple line providers. To ensure there are no chokepoints where both providers have their lines go through the same location, you can ask for the fiber path details to validate this.

Source: A10 Networks, through their DDoS Threat Intelligence Service

Using geographic locations also facilitates understanding by other stakeholders, even if it has a less technological impact on the case at hand. For instance, while undergoing active DDoS attacks, a geographic representation of where they come from helps to get more understanding from management, even though on network-level you're more interested in the Autonomous System (AS) networks that are involved. Those are very large groups of networks that cover the main global-wide routing of data.

If we drill down from a geographic location, the next view is the facility-related one. Here, the view focuses on building design and infrastructure (such as HVAC and power distribution in data rooms or data centers), as well as the location of individual devices (floor plans, rack spaces). Facility views help not just with initial network designs where you want to onboard a new headquarter location, but also with capacity management within data centers (identifying hotspots), dealing with wireless networks and their impact on the surroundings, cable management for networks, ensuring the resilience of infrastructure services and more.

A decent facility view is very helpful when dealing with operational technology environments (IoT), and can be dynamically generated. A while ago, I was at a conference where they showed people's movement based on the data received from their smartphones. They used the view to see which areas were too crowded (it was pre-COVID times), as well as to see if there are sudden movements that might indicate problems or threats.

The next three layers in the location view focus on the foundations for a company's network. They are strongly IT oriented with the main stakeholders being the telco- and infrastructure related teams and roles. Unlike the higher level viewpoints, the foundations require more thought in their design as errors are harder to correct.

The connectivity focuses on the cabling and other connections made between devices. This includes backplane-related connectivity, something that is relevant when using enclosures or pre-engineered systems. Connectivity and cabling seem rudimentary, but are critical for the proper functioning of a network. Remember the science report about possible faster-than-light neutrino's? Well, a faulty connection was partially to blame.

The network underlay is the network view that network engineers have on their network. For small environments, the network view from the engineering point of view might be the same as the view from the application side, but for larger environments, I often see a distinction between the two. And when that occurs, the underlay view is less of a concern for application engineers and business stakeholders (unless of course there are major issues with the underlay design), but that does not make it less important. People are often not aware of how our electricity net works, but if it fails, we're all affected. Similarly, if the network underlay is badly designed, the higher networks will see troubles too.

The network virtualization stack is a technology component that supports building virtual networks on top of the underlay environment. So while the underlay is like the foundation on top of which all networks are hosted, the virtualization makes this possible. In that sense, it is similar to the hypervisor level on the component view (and perhaps is less of a location view than a component one, although network virtualization technologies do require a common understanding of the full network to function properly).

Companies use different virtualization technologies and concepts. A simple network virtualization technology is the VLAN (Virtual LAN), which presents itself as a single broadcast domain to the participating systems, even though these systems might not be physically connected to the same switch or switch environment. It is even possible to stretch VLANs across wide areas.

But virtualization can go further. Technologies such as Cisco ACI or VMware NSX don't just focus on the LAN level, but also virtualize the network on the addressing and routing part. And with Network Functions Virtualization (NFV), we also include firewalls and traffic control. However, do not consider NFV to just be the next phase beyond Software Defined Networks (SDN), as NFV and SDN are different beasts.

View from application and system side: topology and protocols

The highest levels in the location view focus on the network as it is seen by the business applications and systems that a company hosts.

The network topology is the view on segregation, segments/subnets, and the network functions that take part in the overall environment (such as DNS/DHCP/IP address management, firewall functionality, proxies, and other gateways). This is the view that is probably going to change the most, as it constantly evolves based on business demand and IT evolutions. Topology views are not just one-of-a-kind: depending on the scope you want to address, multiple views might be needed to convey the message you want to tell.

One type of view within the topology is the zoning view which I've covered before, and which is very expressive towards the other stakeholders: it covers the entire company's environment while abstracting enough of the details so that it remains understandable.

If we were to zoom in further on the network topology, you get into the specific interactions that are made between systems, which are standardized in protocols. But while the network (and application) protocols are often very standardized, they are also very challenging to understand.

The main challenge is that there are so many protocols out there, with so many options and implementation choices, that you need to be an expert to troubleshoot issues if they arise. Web applications aren't just disclosed over the HTTP protocol: you have channel encryption (TLS), might be using WebSockets, or even the QUIC protocol. And if you think you understand HTTP, do you understand HTTP/2?