At my workplace, I jokingly refer to the three extra layers on top of the OSI network model as a way to describe the difficulties of discussions or cases. These three additional layers are Financial Layer, Politics Layer and Religion Layer, and the idea is that the higher up you go, the more challenging discussions will be.

Recap on the OSI model

The Open Systems Interconnection (OSI) model is a conceptual model for network-oriented communications, which has 7 layers - each with their own specific peculiarities and service offerings.

The seven layers are, from top to bottom:

While the OSI model isn’t 100% applied in standards and protocols, it is conceptually a very common way of looking at communications and network stacks.

When I jokingly refer to the OSI model for complexity and difficulties of discussions, it is through the assumption that the challenges rise the higher up in the stack you go. 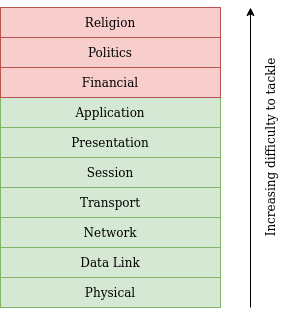 Then, we start rising up the stack. Discussions that are close to the physical aspects are still easy to moderate, but the higher up we go the more chance we have of misinterpretation of the information at hand. People make more assumptions to understand the discussion, which might lead to misunderstandings.

Higher layers are also because we want to abstract away the complexity of reality. Discussions are held on topics that have wider consequences, and thus we abstract this complexity in models so that the discussions can move forward quickly enough. If not all people understand the abstraction (and its consequences), the discussions might quickly move to details and specifics that do not provide much value to the discussion, but are considered as necessary by some of the attendees.

Even worse, the higher up we go, the more flexibility organizations expect. On the lowest level we often have few and highly standardized choices, whereas on higher levels we have different standards due to business units with other requirements. The complexity rises tremendously, and we are often challenged by stakeholders with different agendas.

The OSI model’s highest layer is the application layer, which is the layer that covers discussions on (business) applications, which is often the level of discussions systems architects often have to deal with. A business unit wants solution X, but that solution isn’t compatible with the standards and enablers that the organization already has in place. Another business unit also wants solution X, but in a different way. And while we have solution Y in place as well that covers 80% of the functionality… Well, you know where this is going.

Well, there are situations even worse, which make discussions and the attempts to find a consensus even harder.

The first one (layer 8 so to speak) is the Financial Layer. Here the discussions are on the economic side of things, and if you think those are the easier discussions out there (because financials are mathematically sound, right?) I urge you to dive deeper into this subject, because there is plenty of work out there to simplify these discussions.

The only commonality I see with financial or economical discussions is that they use a currency as a unit together with a time indication. But that’s about it. Even the value of (or interpretation on) the currency isn’t set in stone.

Companies for instance often use internal charging for service usages. This charging isn’t a cost that the company spends, it is mostly just to attribute things to one business unit or the other. You might say it is monopoly (the game) money. But that’s not always the case, as internal charging in larger companies might also effectively reflect themselves in the books / ledgers.

And when you are charged - regardless if it is monopoly money or not - you tend to really try to get the best deal… even though we are talking about chargeback and thus not actual “profits and loss” of the company. If you force your charging to be lower, you’re forcing other’s charging to get higher. And they don’t like that, but rather than discussing this amongst themselves, the discussions are often pointed towards the owner of the service and its chargeback method.

Or when project leaders make a business case (to show if a project is beneficial from the financial side for the company) using chargeback information. Chargeback doesn’t always (and in my opinion, mostly never) reflect the true costs of a service, so using chargeback-currency for a profit & loss currency is a big no-no. Yet this is oh so common still.

Even when we have the right mindset and focus on actual costs… Well, they are hard to obtain, because actual costs are complex beasts. You’ll find plenty of resources online about the Total Cost of Ownership (TCO), but none of them are truly the right resource to never look at others. TCOs are hard, you need to consider things you don’t even knew you have to consider.

Or when you want to know just how something incurs on license costs. Well, good luck in understanding how the vendor measures it (looking at you, Oracle and Microsoft), or what deals your company has made with the vendors under the umbrella of “enterprise agreements” which make all the online resources you find useless. I had the role of license manager for all our Oracle products for a few years, and was involved with the Microsoft license management within my company, and it took me a while to streamline it and communicate it properly within the organization so all stakeholders were sufficiently aware of what it meant.

These are the discussions where you, as an architect or engineer, come in with a presentation that covers all the ends, handles the financial side correctly and with agreements from other architects or engineers that the figures are sound, the solution alternatives correctly evaluated, and the preferred solution a good balance of all the requirements… only to find that the temperature in the room says otherwise.

Discussions on the politics layer cover everything except what is truly at the heart of what the discussion is about. They are about hidden agendas that you will not be presented with at the meeting. Many senior profiles (or, perhaps better, expert profiles) in an organization tend to know what these hidden agendas are about, and know how to ‘play’ and use these politics further. While their seniority of course also focuses on the efficiency side (for instance, a senior project leader can tackle larger projects, structure projects better, are fluent in reporting, etc.) it is truly their organizational experience (and sometimes ‘reading people’ skills) that makes them quickly grow in their expertise.

The challenge is to obtain the hidden agendas and work on disentangling the complexity of it. Hidden agendas are often based on wrong assumptions, past emotional stress, or missing information. While you often cannot try to attack these agendas head-first, understanding their nature can often help in presenting cases in a way that facilitates the discussions. You can disarm the emotional stress, or start with tackling the assumptions that might float around.

Sadly, even seasoned expert profiles however come across discussions that are not just about internal politics or people’s hidden agendas. Sometimes discussions just take on a religious nature. This is when people are adamant that something is true, regardless of the facts or other material that you bring in.

Religious discussion can be found all over the place, not just on management level. They can be about tooling, operating systems, designs, hosting choices, etc. You all know there are people who can discuss Linux versus Windows for ages and ages. Discussions on cloud versus on premise also often are religious in nature. And the less time the organization allows for finding facts and figures, the more these kinds of discussions pop up, and nobody wins on these in the long term.

Knowing when a discussion is internal politics (and thus can still be tackled) versus religion is hard. But once I know a discussion is no longer going to be settled with facts, figures, and emotional/psychological approaches, then I will be likely to try and evade those meetings. I’ll try to facilitate a management decision (if it isn’t religious on management level either) or just deal with the onslaught.

Challenges that are to be settled on the religion layer are no longer about finding the optimal solution, but finding a solution or decision that is “not in the wrong direction”. And while this is a much lower bar, it is hard enough to reach it.