TOSCA is an OASIS open standard, and is an abbreviation for Topology and Orchestration Specification for Cloud Applications. It provides a domain-specific language to describe how an application should be deployed in the cloud (the topology), which and how many resources it needs, as well as tasks to run when certain events occur (the orchestration). When I initially came across this standard, I was (and still am) interested in how far this goes. The promise of declaring an application (and even bundling the necessary application artefacts) within a single asset and then using this asset to deploy on whatever cloud is very appealing to an architect. Especially in organizations that have a multi-cloud strategy.

But while I do see some adoption of TOSCA, I get the feeling that it is struggling with its position against the various infrastructure-as-code (IaC) frameworks that are out there. While many of these frameworks do not inherently support the abstraction that TOSCA has, it is not all that hard to apply similar principles and use those frameworks to facilitate multi-cloud deployments.

Before considering the infrastructural value of TOSCA further, let's see what TOSCA is about first.

TOSCA offers a model where you can declare how an application should be hosted in the cloud, or in a cloud-native environment (like a Kubernetes cluster). For instance, you might want to describe a certain document management system, which has a web application front-end deployed on a farm of web application servers with a load balancer in front of it, a backend processing system, a database system and a document storage system. With TOSCA, you can define these structural elements with their resource requirements.

The parameters can, and should be further parameterized. TOSCA supports declaring inputs that are provided upon deployment so you can safely publicize the TOSCA structure without putting passwords in there for instance. Furthermore, TOSCA allows you to add scripts to execute when a resource is created, which is a common requirement for database systems.

But that's not all. Within TOSCA, you then further define the relationship between the different systems (nodes), including connectivity requirements. Connections can then be further aligned with virtual networks to model the network design of the application.

One of the major benefits of TOSCA is that it also provides abstraction on the requirements. While the above example explicitly pushes for a PostgreSQL database hosted on a specific compute server, we could also declare that we need a database management system, or for the network part we need firewall capabilities. The TOSCA interpreter, when mapping the model to the target cloud environment, can then either suggest or pick the technology service itself. The TOSCA model can then have different actions depending on the selected technology. For the database for instance, it would have different deployment scripts.

The last major benefit that I would like to point out are the workflow and policy capabilities of TOSCA. You can declare how for instance a backup process should look like, or how to cleanly stop and start the application. You can even model how a rolling upgrade of the application or database could be handled.

It is not just theoretical

Standards can often be purely theoretical, with one or a few reference implementations out there. That is not the case with TOSCA. While reading up on TOSCA, it became clear that it has a strong focus on Network Functions Virtualization (NFV), a term used to denote the shift from appliance-driven networking capabilities towards an environment that has a multitude of solutions running in virtual environments, and where the infrastructure adopts to this virtualized situation with (for network) virtual routers, firewalls, etc. Another standards body, namely the European Telecommunications Standards Institute (ETSI), seems to be the driving force behind the NFV architecture.

TOSCA has a simple profile for NFV, which aligns with ETSI's NFV and ensures that TOSCA parsers that support this profile can easily be used to set up and manage solutions in virtualized environments (and thus also cloud environments). The amount of online information about TOSCA with respect to the NFV side is large, although still in my opinion strongly vendor-oriented (products that support TOSCA) and standards-oriented (talks about how well it fits). On TOSCA's implementation stories page, two of the three non-vendor stories are within the telco industry.

There are a few vendors that heavily promote TOSCA: Cloudify and Ubicity offer multi-cloud orchestrators that are TOSCA-based. Many vendors, including the incumbent network technology vendors like Cisco and Nokia, embrace TOSCA NFV. But most information from practical TOSCA usage out there is in open source solutions. The list of known TOSCA implementations mentions plenty of open source products. One of the solutions that I am considering of playing around with is turandot, which uses TOSCA to compose and orchestrate Kubernetes workloads.

As an infrastructure architect, TOSCA could be a nice way of putting initial designs into practice: after designing solutions in a language like ArchiMate, which is in general not 'executable', the next step could be to move the deployment specifications into TOSCA and have the next phases of the project use and enhance the TOSCA definition. But that easily brings me to what I consider to be shortcomings of the current situation.

There are a number of issues I have with the current state of TOSCA.

TOSCA's ecosystem seems to be lacking sufficient visualization support. I did come across Winery but that seems to be it. I would really like to see a solution that reads TOSCA and generates an architectural overview. For instance, for the example I started this blog with, something like the following: 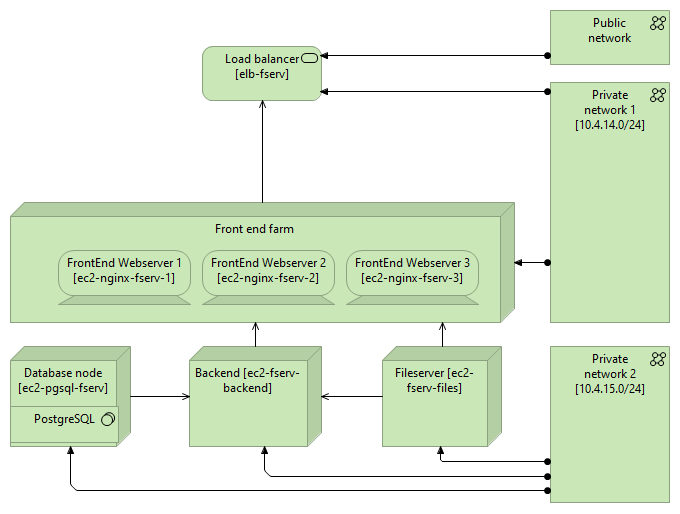 Furthermore, my impression is that TOSCA is strongly and mostly Infrastructure as a Service (IaaS) oriented. The company I currently work for strongly focuses on platform services, managed cloud services rather than the more traditional infrastructure services where we would still have to do the blunt of the management ourselves. Can TOSCA still play a role in solutions that are fully using platform services? Perhaps the answer here is "no", as those managed services are often very cloud-vendor specific, but that isn't always the case, and can often also be tackled using the abstraction and implementation specifics that TOSCA supports.

I also have to rely too much on impressions. While the TOSCA ecosystem has plenty of open source solutions out there, I find it hard to get tangible examples: TOSCA definitions of larger-scale definitions that not only show an initial setup, but are actively maintained to show maintenance evolution of the solution. If TOSCA is so great for vendors to have a cloud-independent approach, why do I find it hard to find vendors that expose TOSCA files? If the adoption of TOSCA stops at the standards bodies and too few vendors, then it is not likely to grow much further.

TOSCA orchestration engines often are in direct competition with general IaC orchestration like Terraform. Cloudify has a post that compares Terraform with their solution but doesn't look into how Terraform is generally used in CI/CD processes that join Terraform with the other services that create a decent end-to-end orchestration for cloud deployments. For Kubernetes, it competes with Helm and the likes - not fully, as TOSCA has other benefits of course, but if you compare how quickly Helm is taking the lead in Kubernetes you can understand the struggle that TOSCA in my opinion has.

Another inhibitor is TOSCA's name. If you search for information on TOSCA, you need to exclude Tricentis' continuous testing platform, the 1900's Opera, and several other projects, films, and other entities that use the same name. You'll need to explicitly mention OASIS and/or cloud as well if you want to find decent articles about TOSCA, knowing well that there can be pages out there that are missed because of it.

While I appreciate the value TOSCA brings, I feel that it might not grow to its fullest potential. I hope to be wrong of course, and I would like to see big vendors publish their reference architecture TOSCA material so that large-scale solutions are shown to be manageable using TOSCA and that solution architects do not need to reinvent the wheel over and over again, as well as link architecture with the more operations side of things.

To learn more about TOSCA, there are a few resources that I would recommend here: